I A A P A
International Association Against Psychiatric Assault

Preamble
- Whereas recognition of the inherent dignity and equal and inalienable rights of all members of the human family is the foundation of freedom, justice and peace in the world,
- Whereas disregard and contempt for human rights have resulted in barbarous acts which have outraged the conscience of humankind,
- and the advent of a world in which human beings shall enjoy freedom of speech and belief and freedom from fear (which consists of freedom from arbitrary incarceration, torture and arbitrary killing) and freedom from want has been proclaimed as the highest human aspiration,
- Whereas it is essential, if a person is not to be compelled to have recourse, as a last resort, to rebellion against tyranny and oppression, that human rights should be protected by the rule of law,
We take as reference point of our actions the atrocities of the systematic psychiatric mass killing in the gas chambers of the "Aktion T4", which started in 1939 as a medical-biological campaign in Germany, followed by the extermination camps in occupied Poland.

We emphasize that the defeat of those barbarous acts, history's worst case of dehumanization and violations of the norms of civilization, was also the basis for the UNO Universal Declaration of Human Rights of 1948 after the Nuremberg trials.

1. Name and seat
The association is established under the name "International Association Against Psychiatric Assault" (IAAPA) according to the civil law 60 FF, civil code (ZGB) with its seat in Basel, Switzerland.

2. Purposes and aims
(A) The association is a group of people whose aim is to abolish psychiatric coercive measures altogether by
a) promoting Human Rights principles as they are defined in the Universal Declaration of Human Rights of the United Nations dated December 10, 1948, and any other human rights instrument consistent with the aims and purposes of this organization

b) co-operating with Human Rights organizations, in particular with the High Commissioner for Human Rights of the United Nations.

c) undertaking other work in support of these aims and principles

We declare, that
a) A human being is a being born of another human being.

b) There is no distinction possible between the fundamental human rights of one human being from another, no matter how unusual a person may look, think and/or express his/her thoughts.

c) Hereby we emphasize the function of the articles of the UNO Universal Declaration of Human Rights to define basic rights of any human being.

d) We declare the use of psychiatric vocabulary as a libel and medical slander, biological and racial discrimination, especially when it claims to describe a person's behavior as caused by a genetic or brain disorder.

e) We declare as forms of torture all psychiatric persecution, psychiatric incarceration and psychiatrically forced bodily acts and intrusions, such as treatment with drugs, electroshock, psycho-surgery, four point restraint and others. These have been consistently defined as torture by persons from all around the world and through the whole existence of coercive psychiatry, regardless if a person is deemed mentally "incompetent" by medical professionals that the procedure is ordered or carried out by medical professionals and that the place of the procedure is declared a "medical institution" called a "hospital".

f) Based on the above arguments we declare psychiatric coercion to be "fear" as it is defined in the UNO Universal Declaration of Human Rights. Every human being has the basic right of freedom from fear.

g) We recognize psychiatry based on coercion, force and violence as a crime against humanity, since it denies individuals the status of a human being, endowed with inalienable human rights, by describing their soul in a biological-medical fashion as "ill" and having a biological-medical "mental illness", thus legally justifying all forms of violence against them.

h) We deny that the UNO General Assembly is entitled, by supporting this psychiatric biological racial doctrine, to exclude a part of the human family from being recognized as human beings and we therefore call upon the nations of the world to abolish the UN resolution 46/119 of December 17, 1991. This resolution violates the basic principles of the UNO Universal Declaration of Human Rights of 1948. This resolution is an assault on the inherent dignity of all members of the human family and on their equal and inalienable rights, the foundation of freedom and justice.

(C) The association is a democratically run, religiously and politically neutral body, however the association is based on an anti Nazi and anti neo-Nazi stand. By "Nazi"is meant a radical biologicalization of politics: the denying of the legal status of "human being" from certain groups in society based on biological grounds.

3. Resources
In the pursuit of the association's aims, all association-internal discussions, applications and resolutions will be made in English and, if necessary, published in English. So that no travel expenses are incurred, the internet will be the means of communication for all internal discussions, general assemblies of the members and the adoption of resolutions. The thereby incurred internet costs will be carried by the members themselves. Because of exclusive communication by means of the internet there are never any secret votings.
In order to pursue the aims of the association, contributions of the members as well as donations and yields of all kinds will be at its disposal.

4. Membership
Only natural persons can become a member and must prove his/her identity by means of a copy of a personal document (passport, identity card or driving license) to the association and who is prepared to communicate with the other members via the internet. Additionally it is indispensable to have an e-mail address for the whole duration of membership.
The acceptance of new members can take place at any time. Applications for membership are to be addressed to the secretariat, which submits it for a decision at the next general assembly of the members.

5. Termination of membership
The membership ends in each case with the death of the member or if he/she relinquishes his/her e-mail address without obtaining an alternative one or does not inform the secretariat of his/her new e-mail address. If she/he obtains a new e-mail address before the end of the year for which she/he has already paid dues, and so informs the secretariat, her/his membership shall be automatically reinstated. In addition, resignation from the association is possible at any time and must be addressed in writing and sent by post to the secretariat. In all of these cases, membership dues for the current year will not be refunded.
A member can be excluded from the association by the general assembly without any reasons being noted in the resolution authorizing the exclusion. Before an exclusion, the member is to be heard by the general assembly of the members. One reason in particular, which leads to the exclusion from the association, is the passing on of data or resolutions which the general assembly decides are to remain confidential.

The secretariat organizes the technical requirements, i.e. a closed chatroom, for which all members receive the necessary password for logging in. The saving of chat protocols and voting protocols will also be taken care of by the secretariat.

Moreover, by means of the above mentioned password, all members can maintain a "bulletin board" on the website of the association for the purpose of requesting and publishing of requests and agenda points for the next general assembly, as well as resolutions by previous general assemblies which are for members knowledge only. The internal newsgroup is part of the "bulletin board", which is incorporated into the preparation for the general assembly. During the six days before the voting is to take place, resolutions, suggestions etc. are discussed in this internal newsgroup, so that on the day of the voting, discussion becomes unnecessary, as opinions about the resolutions etc. have already been given. On the day of voting, the chatroom serves above all to organize all decisions by the general assembly by the votes concerning resolutions etc.

Additionally at least once a year the secretariat will provide a full list of the current e-mail addresses of the members. The members agree by entry to IAAPA to this e-mail address exchange among themselves and commit themselves to treat these e-mail addresses confidentially, not only during their membership but also afterwards and to destroy the list and all copies thereof after termination of membership. A resolution will also be regarded to be valid even without a general assembly according to the here-mentioned rules when all members on the last e-mail list sent by the secretariat, receive an e-mail with the request for this resolution 6 days before the voting and 60% of the members within this e-mail list reply by e-mail to all others on the list, agreeing to the requested resolution in the 24 hour period following the end of the 6 day deadline. Resolutions concerning changes to the statutes, dissolution of IAAPA or its joining another organization are not included in this exemption stipulation.

For a general assembly with a request for the "dissolution of the association" or "merging with another organization", all members have to receive an e-mail from the secretariat four weeks in advance with the invitation to the mentioned general assembly, in which the decision about putting the resolution of dissolution on the agenda is to be made.

Logs will be made of all general assemblies and votecasting; the resolutions will be published on the IAAPA website. The voting results are only published internally. If within a month after the general assembly no resolutions are contested, the postings in the internal newsgroup and the logs are to be destroyed. As soon as any member has an objection against resolutions or the chat minutes or the voting results, the logs are carried forward and may not be destroyed at least up to the next general assembly where the decision is made over the further period for safekeeping.

8. The executive committee
The executive committee consists of one or more persons, namely those functionaries selected by the general assembly and are selected in each case for a maximum of two years. Re-election is admissible. Premature voting out or resignation is at any time possible, however only by a constructive vote of no confidence, thus a simultaneous election of a successor.

12. Dissolution of the association
In the event that the association is resolved, the general assembly of the members decides on the use of any possible liquidation proceeds, which must be donated to an institution with the same or similar aims. Distribution of these proceeds among the members is prohibited In this connection, if no resolution is made, the proceeds are to be transferred to the High Commissioner for Human Rights of the United Nations.

13. The entry into force of the statutes
These statutes will be assumed on the occasion of the founders' general assembly of 21st of October 2002 and immediately put into effect.

The writer of the minutes: Uwe Pankow

The other founding members 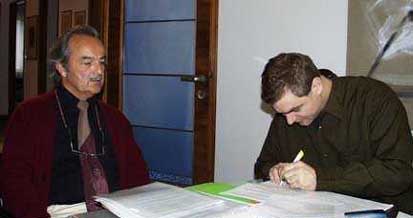 Uwe Pankow, the writer of the minutes, puts his signature on them.